The 2017 tax reform changes resulted in a number of adjustments to the laws and associated strategies taxpayers are accustomed to. One element I want to talk about today is how the Tax Cuts and Jobs Act has made Partial  Roth Conversions even more attractive. To understand why Partial Roth Conversions are even more attractive, you need to have a firm understanding of how the marginal tax rates have changed under the recent tax reform.

For example, consider that Tom and Sue have $276,000 of taxable income after taking the $24,000 standard deduction available to married couples filing jointly in 2018 (or $300,000 in total household income). 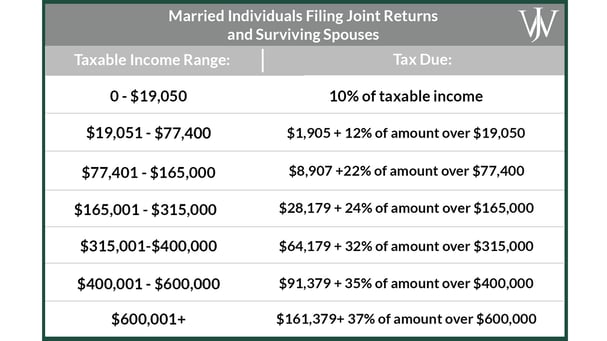 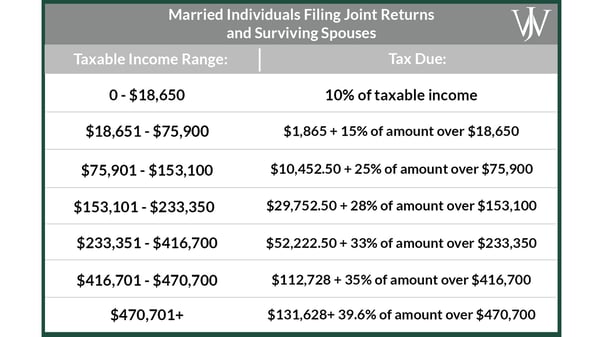 In some cases, it may be possible for an individual to not owe ANY federal taxes, even though there is not a 0% tax bracket.

How does this occur?

If the difference between an individual’s income and deductions is zero or less, they may be exempt from paying federal taxes. Considering the increase of standard deductions for single and married individuals, such a situation is most likely to occur among corporate executives and professionals in the first few years after retirement (specifically those that took pensions as a lump sum and are living off after-tax income first).

Although recent changes to the tax code have lowered personal tax rates for a majority of individuals, these reductions are expected to go back up in the future, unless Congress makes the lower rates permanent as it did with some of the Bush administration’s tax cuts in 2012. Therefore, it may be best practice to modify your financial plan so that you take advantage of this tax break while it’s still in effect.

I’ve talked about the marginal rate, but let’s do a quick refresher on Roth IRA. They are a particularly tax-advantaged way to save for your retirement years.  A few of the main advantages of this retirement account are as follows:

Why am I talking about Roths and the Tax Cuts & Jobs Act? Because of how powerful partial Roth Conversions can be, given the lower marginal rates that are expected to go up in the future!

For example, an opportune time to do a Roth Conversion is during a year when you have a lower income than you expect to have in the future. Typically, this would be someone who just retired, was laid off, or has made large charitable gifts.

A common mistake we’ve observed among the newly retired professionals we serve is their tendency to become overly excited when they experience the transition of paying little to no taxes in the first few years after retirement. We often see this from our clients at Shell, Chevron, Exxon, and others (especially when they decide to take a lump sum pension as opposed to annuitization).

However, this elation will be short-lived if they do nothing to take advantage of these low tax years, as their marginal tax brackets will likely be increasing significantly as Required Minimum Distributions (RMDs) and Social Security will shift them to a much higher tax bracket in the future.

It’s important to remember that if you do not take advantage of low tax brackets during these low-income years, you will be forced to take out the money when you’re in a higher tax bracket, thus increasing the amount of taxes you pay during that time.

For example, consider that you’re a sixty-year-old, married household who files a joint tax return and has a significantly large IRA. The IRA will begin automatically kicking out RMDs at age 70, and the Social Security payouts must begin by age 70 as well. If the above household has $100K of income from a pension today, they will pay a marginal tax rate of 22%.

Remember, the lower marginal rates from the Tax Cuts & Jobs Act only lasts for 10 years before reverting!

However, if this household were to employ a partial Roth Conversion, it would allow them to pull future income forward taking it out at a 22% rate (instead of a 33% marginal rate). This household could take an additional $65,000 of income each year for the next 10 years, by converting $65,000 of IRA money to Roth IRA money. Yes, they will be required to pay taxes upon making the Roth Conversion, but these strategic conversions will increase the Roth IRA assets and decrease the size of the IRAs. This lowers the future RMDs thus decreasing their total future income and shifting their future marginal tax bracket to a lower rate of 28%. 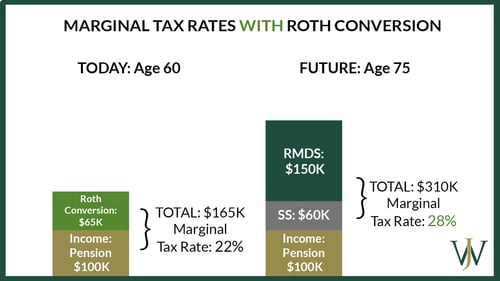 What makes partial Roth Conversions even more exciting in the context of today’s tax laws is that the current lower rates will Sunset (Remember the tax cuts expire in ten years and almost all the rates get worse!). Even if the household happens to have the same taxable income in the future as they do today, they are most likely in a lower tax rate today.

Other Considerations for Tax Payers

A major change implemented by the recent tax reform law is the elimination of Roth Re-characterizations. Therefore, if you convert money to a Roth, you are unable to move the money back to a pre-tax IRA account. Because of this, we generally recommend that our clients convert their money at year-end once they know the total income they have earned. It’s common for households to underestimate their total income for the year as investments, pensions, restricted stock payouts, consulting income, and various additional items are often overlooked when looking ahead for the year.

If tax rates decrease for American taxpayers as a whole or an individual household, Roth Conversions may not be a smart financial decision. This is because you are converting money at potentially higher tax rates today and you might be paying in the future. Of course, we do not think it is likely for rates to go down in the future.

Roth Conversions and the 5-Year Rule

As we move forward under the new tax code, it’s important to remember a few of the time limitations associated with Roth Conversions. You are not able to immediately withdraw money from a Roth IRA because of the five-year clock rule.

This rule stipulates that five years must have passed since the tax year the Roth Conversion was made before you can withdraw the converted portion of the earnings on the account without being subject to penalties or taxes.

It’s also important to remember that Roth IRA distributions are taken from contributions, conversions, and earnings, in that order.

Roth conversions are not the only option available to help fill up low-income years. There are other opportunities available and it’s worth understanding the pros and cons before making a decision. Additional options include:

If you would like to learn more about the recent tax code changes and how they may affect your financial strategy, contact a trusted advisor or a WJA representative for more information. You can also register for one of our upcoming webinars, here.

Want to check out my first blog post breaking down the changes given the Tax Cuts & Jobs Act? Read it here.