6 Things Expats Need to Know About Taxes Before Moving Abroad

When you become a U.S. expatriate, or “expat,” for an oil and gas organization, it can be an exciting new venture for you and your family. Whether you’ve been transferred to a new office or chose to live internationally, moving overseas is no simple endeavor. An expat’s financial planning is complex, nuanced, and can have substantial costs if implemented incorrectly. Before hopping on a plane, it’s important to understand the various tax rules and benefits that apply specifically to expats as well as the consequences.

For starters, just because you leave the United States does not mean that you leave the Internal Revenue Service behind. A U. S. citizen living anywhere in the world must still file a U.S. tax return reporting his or her worldwide income. Additionally, some very important forms must be included in the U.S. tax return. Failing to comply with these tax laws could result in costly penalties, and you could miss tax benefits that are exclusively for expats.

When you relocate internationally, you should strongly consider hiring a local professional who is knowledgeable in the tax regime of the country you reside in. You should also have a tax professional back home in the U.S. who can advise you regarding the IRS requirements for expats.

Don’t forget—upon relocating, you will be required to file two tax returns, one for the U.S. and one for the country you now reside in. 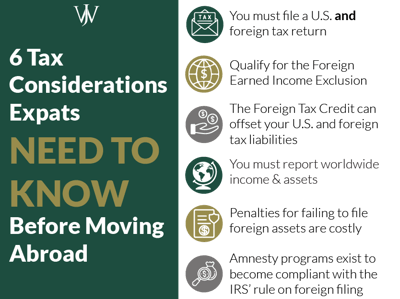 A significant tax benefit available for expats is the Foreign Earned Income Exclusion (FEIE). This is a U.S. tax benefit built upon the premise that you are already paying income taxes to the country in which you are residing. To pay taxes again to the U.S. on the same income would be double-taxation.

To avoid this double-taxation, the IRS permits an exclusion of foreign earned income by an inflation-adjusted amount that changes each year. For 2020, the FEIE is $107,600 per individual. This means that the first $107,600 of earned income per individual is excluded from U.S. taxable income. Since the FEIE is per individual, a married couple filing jointly could exclude up to $215,200 of their earned foreign income in 2020. There is an additional exclusion available for qualifying housing expenses.

First, the FEIE is only on earned income, which is income you earn while employed or self-employed. The FEIE does not apply to rental income, interest, dividends, capital gains, or passive income.

Second, you cannot just automatically use the FEIE. You must qualify for it.

If you do not meet either of these tests, then you are unable to use the FEIE against your U.S. taxable income.

As an expat, you will want to plan your travels to and from the U.S. to ensure that you meet either of these tests. Otherwise, you will not qualify for the FEIE, leaving tax dollars on the table that could be saved.

As previously stated, you will want to have tax professionals both in the U.S. and the foreign country you are residing so that you are confident that both tax liabilities are computed correctly.

Each year when you file your U.S. tax return, you must report your worldwide income. For example, Julie, a U.S. citizen, moves to the Netherlands to work for a Netherlands-based oil and gas company. While in the Netherlands, she opens a local bank and investment account, in which she invests in shares of stock in foreign-based corporations. She also purchases a home that she rents to a local couple.

Julie must report all her foreign income on her U.S. tax return. This includes her salary from her employer, along with interest and dividends from her foreign investments. She also must report the rental income and expenses from her rental home. If she meets either the bona fide residence test or the physical presence test, she will qualify for the FEIE and housing exclusion. She may even qualify for the foreign tax credit.

There is a different IRS form depending upon the type of asset being reported. We encourage you to reach out directly to our tax experts if you have specific questions about reporting these assets.

The U.S. Treasury also requires a separate filing in addition to the forms included with your tax return. This filing is a Report of Foreign Bank and Financial Accounts (FBAR) and must be filed electronically with the U.S. Treasury.

Several years ago, the IRS began to scrutinize U.S. citizens’ failure to report their foreign financial assets. As such, the IRS implemented costly penalties for failure to report not only the income from foreign assets, but also information regarding foreign assets as well.  To report your foreign assets in alignment with IRS guidelines, you must report any foreign financial accounts that you have financial interest or signature authority over with aggregate values exceeding $10,000 at any time during the year. The FinCen 114, Report of Foreign Bank and Financial Accounts, must be filed separately from your tax return with the Department of the Treasury by April 15, with an automatic extension to October 15. The penalties for failing to file are costly, beginning at $10,000 per reporting violation.

For example, Joe is a U.S. citizen residing in England working for a foreign employer. He has a bank account, a savings account, and a pension account in England. The combined amount of the accounts is $545,000.

Not understanding the U.S. foreign filing requirements, Joe failed to report these accounts on a yearly FinCEN 114 (FBAR), and Form 8939. His potential penalty is $10,000 per account per year he failed to file. If Joe is found by the IRS to have willfully failed to file, the penalties could be much higher.

Throughout the years, the IRS has implemented various amnesty programs to help taxpayers comply with the delinquent foreign filing requirements without becoming bankrupt from IRS penalties. One of the simplest programs is the Delinquent International Information Return Submission Procedures (DIIRSP), and is for taxpayers who:

Taxpayers who qualify for the DIIRSP should speak with a tax professional or tax attorney about the proper procedures for filing the delinquent information returns. At Willis Johnson & Associates, we have a strong network of experts who can guide you in this area.

Deciding to move overseas or start a new chapter as an expat can be an exciting venture when done correctly. If done incorrectly, there can be several legal and financial ramifications. Don’t overlook the importance of filing your U.S. tax return, reporting your foreign income, and properly reporting your foreign financial assets—the results of ignorance add up.

A simple example illustrates how these costs can add up quickly:

A U.S. citizen named John moved his family to Australia 10 years ago to work for an Australian company. His children enrolled in schools and adjusted rapidly. The entire family loved Australia so much they decided to stay.

After a time, John and his wife decided to start a jointly–owned business and became self-employed. They also began to purchase small homes as rental properties. All this time, John never filed a U.S. tax return because he thought you only needed to file a return if you actually resided in the U.S.

When at last John realized his failures, he sought a tax attorney to become compliant with the IRS. To do so required him to file delinquent tax returns and pay the tax liabilities, plus penalties and interest on the amount due. Additionally, he faced exorbitant penalties for not filing specific forms that report his foreign financial assets and for not filing his yearly FBAR with the U.S. Treasury.  To settle the tax liabilities, penalties, attorney costs, and CPA fees, John had to sell some of his rental properties to afford it all. This was extraordinarily costly for John, so make sure you don’t make the same mistakes.

While moving overseas is an exciting opportunity, there is much to consider in making the transition. We encourage you to seek a professional when you move overseas as an expatriate so that you protect the assets you have worked so hard to accumulate. 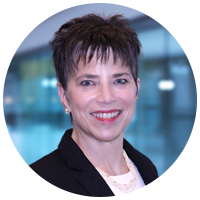 © 2021 Willis Johnson & Associates. Registration does not imply a certain level of skill or training.