Remote Work & Taxes: The Cost of Working from Home in a Different State

With the rise of the pandemic also came the rise of remote working. While remote working existed before 2020, the shift to working from home became commonplace after the COVID-19 pandemic. Fast forward a few years, and remote work is now a pretty common occurrence. For many companies, remote work is a staple in reducing overhead costs. Given the flexibility remote working offers to employees, many people have jumped at the opportunity to travel and work in different locations while exploring new areas in the United States or across the world!

Exciting, right? Unfortunately, many people fail to realize that this could create profound tax implications in multiple states or subject you to double taxation on your income!

How Can You Owe Taxes When Working Remotely from Another State?

When you work in a new state for a specified period, you create a “nexus with that state.” Nexus is a fancy term used when someone creates a link with a state which allows said state to impose its laws upon them. The length of time spent in a state before it imposes a nexus varies from state to state.

Each of the states below charges no state income tax on earned income, which makes them a great option for remote workers looking to work from a new place.

Each of the states below imposes taxes on any and all earned income from your time within the state, even if your time there is extremely short. Many of these states charge both state and city income taxes.

There are multiple tests for states to calculate if a nexus exists with you, but the test that applies most to remote working is the physical presence test. 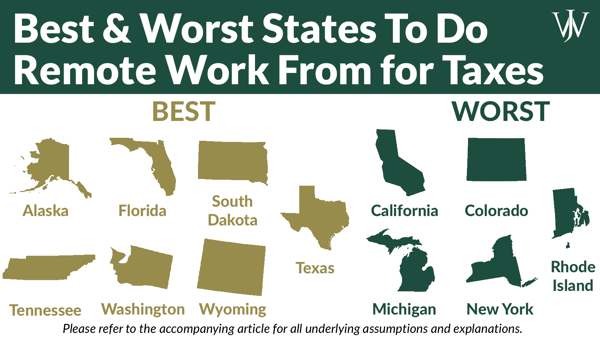 What the Physical Presence Test Means for Remote Workers & Consultants

Have you been traveling around working a month here or a month there across the United States to make the most of your remote working experience? Your physical presence while working in a state can link you and that state, which would make you subject to the state’s laws — including you owing state or local income taxes on the income earned while working in that state.

How the Physical Presence Test Impacts a State's Nexus

The Physical Presence Test also impacts those who travel for work or client meetings, including consultants. No matter why or how you are traveling, if you are working anywhere other than your home state of residence, you may be creating a link with new states. Therefore, you need to report any income you earn during your travels.

Let’s consider an example. Suppose you live and work in Texas, but during the year, your employer announces you are going fully remote for two months for health and safety reasons. You decide to go to Colorado to work remotely and stay with family during that time. By working in Colorado for two months, you would create your nexus tie to Colorado and be subject to the following:

During the pandemic, many companies pivoted to a remote workforce, and many states put safe harbors in place regarding income taxation. States largely put these in place to either protect the state’s residents from a double taxation situation or create ease for employers when filing for income taxes so they wouldn’t have to keep records from multiple places.  As of mid-2021, most states have let this safe harbor expire, including, but not limited to: California, Maine, Massachusetts, Pennsylvania, Iowa, Maryland, Oregon, Rhode Island, and South Carolina.

While some states are stricter with the enforcement of nexus rules, other states are beginning to collaborate on the best ways to tax people who live and work in different locations. There are even some states offering incentives to remote workers. For example, in early 2022, Louisiana offered a 50% tax credit on a nonresident Louisiana income tax return for remote workers.

With the ongoing changes to the tax rules and the upward trend for continued remote work, many states are attempting to recoup the losses they took during the safe harbor times on the taxes they could have potentially collected. In fact, by the end of 2021, we saw that some states looked to enforce their nexus rules for collecting income taxes with added gusto in 2022 and beyond.

How Much Could Working from Another State Cost You in Taxes?

Many people do not realize that if you travel and work in a state, you could be creating a link to that state and, in return, exposing yourself to tax liability. While the income earned in a state could produce a relatively low tax you would need to pay, the potential accrual of penalties and interest from not filing a return or paying your tax could add up to a significant number.

Let’s suppose you and your spouse worked in California for two months during December 2021 and earned $55,000 in income from consulting services while there. Because of this, you would need to file a California income tax return for 2021. If you were unaware of your tax filing obligations and never filed a return, you would still be on the hook for the tax owed initially, a late filing penalty, a penalty on not paying your tax, and interest on the amount owed. Based on the $55,000 of income earned during those two months in California, your tax bill would be roughly $745. If you do not file this return or pay this tax bill for one full year, your tax bill will increase to approximately $877 after factoring in penalties and interest.

While this may not seem like a huge tax bill at first, the interest continues to collect on your tax amount until you file the return and pay the bill so it can add up quickly.

Double Taxation Consideration When Working from Home in Another State

In addition to simply worrying about where you are conducting your business, you should also be wary of potential double taxation that could occur. While many states have adjusted laws for how remote workers will be taxed, some neighboring states have contradictory laws that could potentially cause you to be double taxed.

How to Avoid Tax Mistakes of Working Remotely from Another State

Before choosing to remote work in a new location, the taxpayer should know that their choice could have state income tax implications. Remote working taxpayers could be liable for reporting income in multiple locations and under numerous jurisdictions by working from other states. In addition, if improperly completed or not completed at all, these filings could cause severe penalties and interest to be imposed in addition to the tax already owed.

In this new age of digital working, it Is more important than ever to understand the potential tax consequences of remote working. Suppose you are considering working in multiple locations in the upcoming year, or you have been traveling around while working in the past year. Consulting with your financial advisor and tax team about the implications of doing so and planning how to report your multi-state earnings properly can make a substantial difference in taxes over time. Start the conversation with an advisor today. 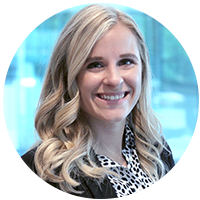