The votes are in, and the Blue Wave is here. The Democrats now have control of both the presidency and Congress meaning that one of the common fears on many of our client’s minds—taxes going up—now looks more likely. High-income households earning over $400,000 a year would be those most likely to be negatively impacted by Biden’s tax plan, given the details we know so far. Many people are starting to plan today in attempts to mitigate a potential tax hike in the future, so it’s important to understand how tax law may change in the coming months and what options are available now for planning.

What Biden’s Already Announced for His Tax Plan

On the campaign trail, Biden promised to only increase taxes for those earning more than $400,000 annually. Matter-of-fact projections by the Penn Wharton Budget Model predict that, if Biden’s plan passes, those earning over $400,000 will see their after-tax income decrease by nearly 18%. Yikes!

Many of our clients are high-income earners making close to or over $400,000 annually, so let’s dive into the various components of Biden’s proposed tax plan and what high-income families need to be thinking about in upcoming years.

One of the most contentious components of the tax plan proposed by the Biden-Harris administration is the increase in the top ordinary income tax rate from 37% to 39.6% upon earning over $400,000 of income. For many, this shift doesn’t seem too significant, especially when you remember that the Tax Cuts & Jobs Act expires in 2026 and the max tax bracket will revert to 39.6%.

The biggest point of concern for high-income earners is that under Biden’s tax plan, the max bracket of 39.6% will start at a much lower threshold of $400,000. Additionally, Biden has not specified whether the $400,000 applies to married households, individuals, or both. As of February 9, 2021, Biden’s website simply reads, “He won’t ask a single person making under $400,000 per year to pay a penny more in taxes…”

Let’s consider an example to illustrate the significant difference high-income families can expect to pay in taxes.

Conversely, under Biden’s proposed tax plan, this same taxpayer would be taxed at 39.6% for the $100,000 of their income exceeding the $400,000 income threshold. The proposed changes would cost this taxpayer approximately $4,600 more in taxes than the current tax laws for this $100,000 of income, and this is just on federal income taxes before considering any additional state or city taxes that could be tacked on later. 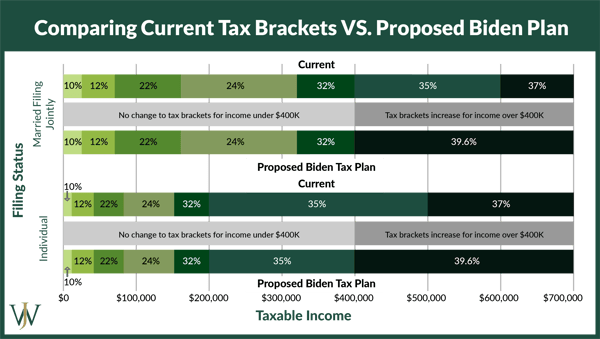 Not only are ordinary incomes taxes projected to rise under the Biden plan, but high-income earning professionals will get impacted by a new Social Security Payroll Tax on earned income above $400,000. Currently, the Social Security tax disappears once individuals begin earning more than $142,800.

This 12.4% Social Security Payroll tax would be split between employers and employees. Thus, with the new plan, people would pay the 6.2% payroll tax on income up to $142,800, then nothing, until they start making over $400,000.

The simple adjustment to which income is taxed for Social Security would cost this taxpayer approximately $15,053 under the new plan, rather than the $8,854 in taxes given current law.

In addition to the changes Biden’s proposing to ordinary income tax brackets, those earning over $400,000 are also going to lose some of the value of their itemized deductions under the new tax plan. Currently when you itemize (or take the standard deduction), you can reduce your adjusted gross income by the amount of those deductions and the difference—your taxable income—is what you end up paying taxes on. Thus, itemized deductions effectively reduce your taxable income at your highest marginal rate.

It’s important to note that for those not itemizing, but instead choosing to take the standard deduction, the new 28% limit would have no effect. In addition, Biden would restore the Pease Limitation on incomes over $400,000, reducing the value of itemized deductions even more.

Charitable deductions would likely be an area to be hit hard by this change as most other itemized deductions have already been impacted from the Tax Cuts and Jobs Act. Under the TCJA, miscellaneous itemized deductions have been gutted, State and Local Taxes (SALT) are capped at $10,000, and even the deductible value of mortgage interest for high-value properties has been reduced. The biggest deduction we now see for our clients is charitable deductions, which could be dramatically impacted by the new 28% limit.

While Biden has not proposed removing the State and Local Tax limit of $10,000 per household, it is high on the agenda for the Democratic platform. With a Blue Wave in place, the repeal of these limits is one item that we should consider the possibility of and pay considerable attention to when planning.

What Impact Will Biden’s Tax Plan Have on Investment Gain Rates?

When discussing Biden’s tax plan, one thing many people fail to consider is that the plan could also impact returns on investments. Capital gains and qualified dividend rates which traditionally have had preferential rates will lose quite a bit of their benefits under the Biden tax plan. 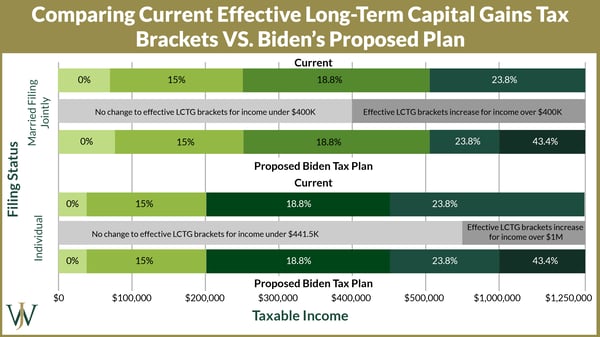 A major concern we see for many of our clients is the concern regarding estate taxes. Many households that currently don’t have to worry about estate taxes could face a significant tax bill under the proposed changes.

In addition to lowering the estate tax exemption, Biden would lower the gift tax exemption. Today, an individual can gift up to $15,000 (or $30,000 for a couple) to anyone else each year they are alive and pay no gift taxes. Biden’s proposal would lower that limit to $13,000, dramatically reducing what families could gift over to the next generation.

Even if Biden does not make any changes to the estate tax limits, they do revert down to an inflation-adjusted $5 million per person (or $10 million per couple) on January 1, 2026. Thus, households with more than $7 million in net worth today, and especially those inching towards $10 million, should be thinking about their gifting and estate plan today if they don’t want a substantial amount of their estate to go to Uncle Sam.

To avoid the tax consequences mentioned above, many people would choose to defer gains and pass their assets onto the next generation to get a step-up in basis. Biden has additionally proposed getting rid of step-up in basis at death!

Right now, if you own stock that has appreciated, you can avoid ever paying capital gains taxes on selling the stock if you pass it onto your heirs at death and they sell it. This is because your heirs get to increase (step-up) the basis on the stock at the date of your death. This change in law could dramatically reduce the benefit of holding onto appreciated stock, passing it onto the next generation, and never paying long-term capital gains on the stock, likely causing people to sell and rebalance sooner.

While we don’t know yet if or when Biden’s proposed tax changes could go into effect, our advisors are working with clients now to prioritize various planning options to be ready whenever the changes go into effect.

In addition to the changes listed above, Biden has proposed a number of other tax changes that could impact corporate executives and professionals. A few of the proposed changes include:

Despite the increased possibility of taxes going up in the future, we do not expect a change in the law to impact 2021. Historically, it’s been difficult to backdate tax rules, so we believe that any changes to the tax laws will impact 2022 at the earliest. 2021 may be the last year under the Tax Cuts and Jobs Act rules, before taxes go up in 2022 providing a small window of time for tax planning for those concerned about the possibility of taxes going up under Biden.

It's important to note that, besides informing yourself about what the various possibilities could be and beginning to think about what tax planning strategies you may want to consider are, we don’t currently believe it’s necessary take immediate action. While we wait to get more answers on these potential changes, there are a few tactics and considerations we’re discussing with our clients now to prepare accordingly.

With the Federal Reserve boosting stock prices right now and a high likelihood of additional COVID stimulus, we believe the economic impact of any changes to the current tax law won't be felt this year. As part of our fiduciary responsibility, we believe it best to begin working with our clients proactively to provide guidance and education about the Biden tax plan and how it impacts their specific tax situation. If you’re interested in getting an expert opinion on your tax situation, reach out to our team and we can give you recommendations to make the most of whatever changes arise.