After much negotiation, and many compromises, the GOP has passed the final tax reform plan, which looks quite a bit different than the simplified version Trump and Ryan were pushing for in early 2017.

In the end, the GOP did succeed in lowering both corporate and personal rates, but it did not simplify tax rules for Americans.

Instead, the revised tax code will complicate financial planning for individuals going forward. Financial advisors will require a thorough understanding of the changes implemented in order to help individuals create or alter their long-term financial plans.

The Sunset Provision only allows Senate legislation to be passed with a simple majority if it does not result in net tax cuts beyond a 10-year period (otherwise, it requires 60 votes to prevent a legislation-stopping filibuster). Republicans had to allow Sunset Provisions into law since they did not have enough votes to prevent a filibuster in the Senate. However, many Republicans anticipate that they will eventually be able to make the rules permanent, because when the 10 years are up, the “fiscal cliff” it creates may compel Congress to act to prevent a tax increase. (This is similar to how the sunset provisions of President Bush’s tax cuts were ultimately made permanent).

Want to get an idea of how it will affect you? CNN put out a fairly robust tax calculator that does a reasonable job estimating your change in after-tax income.

Unlike personal tax changes, corporate tax rate reductions are permanent. In addition, the rules for corporate tax rates (especially pass-through entities) are quite complex and we are expecting many to focus in on loopholes to game the system going forward. Though, not a focus of this article, if you own a small business, are a consultant, or receive pass-through income, we highly recommend you speak with a tax advisor to discuss strategies going forward.

Individuals will still face seven tax brackets, on top of the Alternative Minimum Tax (AMT), which the GOP was unable to do away with despite it being one of their goals going into reform. The final tax brackets under the GOP Tax Plan, though, followed the original Senate proposal, which retained our existing seven tax brackets, and simply trimmed (most of) the tax brackets by a few points. In the end, the Tax Cuts & Job Acts (TCJA) official tax brackets will be 10%, 12%, 22%, 24%, 32%, 35%, and a top rate of 37%, and will remain in place until the end of 2025, when they will sunset.

While tax reform is estimated to create savings for most households, wealthier households are expected to receive a larger percentage of positive change in their after-tax income. Likewise, in an attempt to reduce the impact of the marriage penalty, married couples generally receive more of the benefit compared to individuals (unless they earn over $600,000). This can best be seen in the comparison of marginal rates between the old law and the new. See the chart below from Kitces.com. 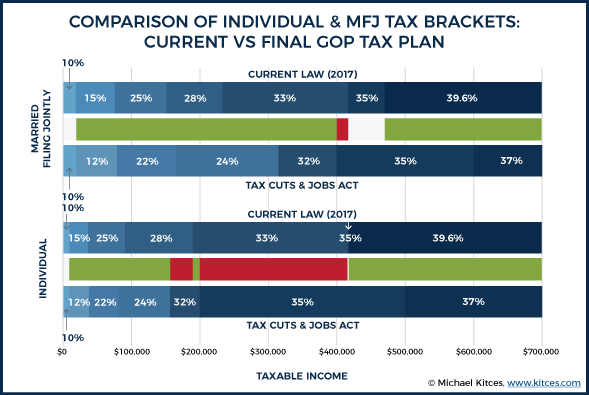 An important consideration going forward will be to optimize tax brackets given current and projected taxable income. For retirees, this will include when one should begin Social Security, receive distributions from insurance products (like variable annuities), and withdraw from pre-tax retirement accounts. Pre-retirees should consider whether additional deferrals should be placed in pre-tax or post-tax (Roth) retirement accounts given current and projected tax rates. For some households, low current tax rates may mean Roth deferrals are more attractive in an environment where rates are expected to go up in the future.

Standard deductions have almost doubled and the personal exemption has been removed with the new tax reform. Households will still be able to claim most deductions, but many are now limited. For example:

The deduction increase is predicted to cause fewer people to itemize deductions, but they may miss out on the benefits bundled deductions can offer. Estimates are that 94 percent of taxpayers will take the standard deduction, which provides even more opportunity to bundle deductions in the future. And with a higher standard deduction, far fewer will itemize at all. As such, bundling deductions may become more and more important going forward. Overall, the strategy for bundling deductions will change and you will need to consult your tax advisor to determine the best strategy for bundling in the future.

Many people will not be able to itemize every year. If charitably inclined, you may choose to bundle deductions using a Donor-Advised Fund, or DAF. Consider bundling deductions one year and taking the standard deduction the next. A DAF may allow you to maintain your effective charitable contributions, while still bundling your deductions. 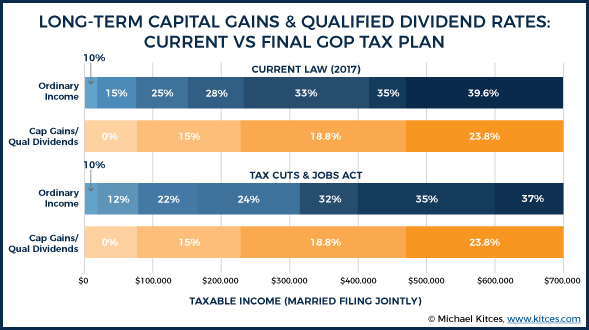 As such, it will be even more important going forward to complete tax planning for higher net worth households. Such individuals will need to choose (when possible) between filling up low tax bracket retirement years by receiving additional income from realized capital gains instead of implementing ordinary income from strategies like low-bracket Roth conversions, which will have more complex trade-offs going forward.

If you have any questions regarding the recent tax reform plan and how it may affect your financial future, consult your tax advisor or reach out to a member of the WJA team.