How Should High-Income Families Respond to the SECURE Act

The recently-passed SECURE (Setting Every Community Up for Retirement Enhancement) Act the most significant piece of legislation impacting retirement savings since the passage of the Pension Protection Act of 2006.  The stated intent of Congress in passing SECURE is to make it easier for working Americans to save for their retirement years. To be sure, SECURE has plenty of provisions that will benefit those planning for retirement. The SECURE Act is effective for years beginning January 1, 2020.

Under SECURE, if you make a Traditional IRA contribution after age 70 ½ and have been taking Qualified Charitable Distributions (QCDs) to meet your Required Minimum Distribution (RMD), the amount of your QCD that is excluded from income tax will be reduced by the excess of: (1) the total amount of IRA deductions allowed to the taxpayer for all tax years ending on or after the date he or she attains age 70-1/2, over (2) the aggregate amount of such reductions for all tax years preceding the current tax year.

Before SECURE, individuals were required to begin taking required minimum distributions (RMDs) from retirement plans the  April 1 after the individual reached age 70 ½. Under SECURE, the RMD age is increased to 72.

How Will SECURE Affect Your RMDs? Learn More

#4: Inclusion of Permanent Part-Time Workers as Participants in 401(k) Plans

Prior to SECURE, part-time employees were generally excluded from participation in their employer’s 401(k) plans. Under SECURE, employers will be required to include certain permanent part-time workers in their 401(k) plans. An employee will be considered part-time if he or she has worked at least 500 hours per year with the employer for at least three consecutive years. Additionally, the employee must have met the age requirement (age 21) by the end of the three consecutive year period.

SECURE expands 529 education savings account distributions made after December 31, 2018 to cover expenses for registered apprenticeships and up to $10,000 of qualified student loan repayments. This will be quite beneficial for individuals who have remaining balances in 529 plans at the end of their education and have large student loan debt.  The 529 balance can be used to pay down the student loan debt.

The SECURE Act allows distributions for student loan debt to a sibling of a designated beneficiary.  Note, however, that the student loan interest expense deduction will be disallowed to the extent the interest is paid from a tax-free distribution from a 529 plan 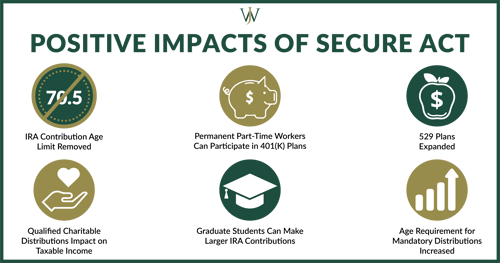 If you have large Traditional IRAs or 401(k) accounts, you should be very aware of a SECURE Act provision that will significantly reduce the after-tax amount of wealth that can be transferred to your children and grandchildren.

The SECURE Act eliminates what is commonly termed the “stretch” IRA for individuals dying after December 31, 2019. A “stretch” IRA is an inherited Traditional IRA wherein a non-spouse beneficiary can take (stretch) Required Minimum Distributions over his/her life expectancy.

Because of this provision, ALL Individuals with large Traditional IRAs and 401(k) plans should consider action in response to SECURE.

If no action is taken, an individual stands to  lose significant wealth for the next generation. Let’s illustrate this by way of a simple example.

Example: Joe has a $1,000,000 Traditional IRA earning 6% per year, and his unmarried daughter, Amy,  is his designated beneficiary. When Joe passes away, Amy is 30 years old. Prior to the passage of the SECURE Act, Amy would have been able to take her RMDs from the inherited IRA over her life expectancy.  Each year, the amount of her RMD would be computed as per the following equation:

The IRS publishes life expectancy tables in the Regulations of the Internal Revenue Code (specifically Reg. Sec. 1.401(a)(9)-9). In our example, a single person aged 30 years old has a life expectancy of 53.3 years.

The following table shows the first 15 years of RMDs to Amy after Joe’s death. The table assumes the IRA continues to earn 6% per year (we have not included federal or state income taxes in this calculation):

Before SECURE, the RMDs would have been “stretched” over Amy’s life expectancy allowing the balance in the Traditional IRA to grow at a rate of 6% per year.  From this example, you can clearly see how the IRA is increasing in value over the first 15 years after Joe’s death.

The Monetary Impact of SECURE

The SECURE Act eliminates this “stretch” by requiring beneficiaries withdraw the balance of the IRA within 10-years after the year of the date of death. This changes the math quite a bit.

Amy, who is now 40 years old, reinvests the net balance of $1,081,672 at 6% and yearly withdraws an amount equal to distributions based on her life expectancy (43.3). By the time she reaches age 83, her total distributions will be $5,575,401.  The total wealth lost by Amy because of SECURE is significant, as shown below: 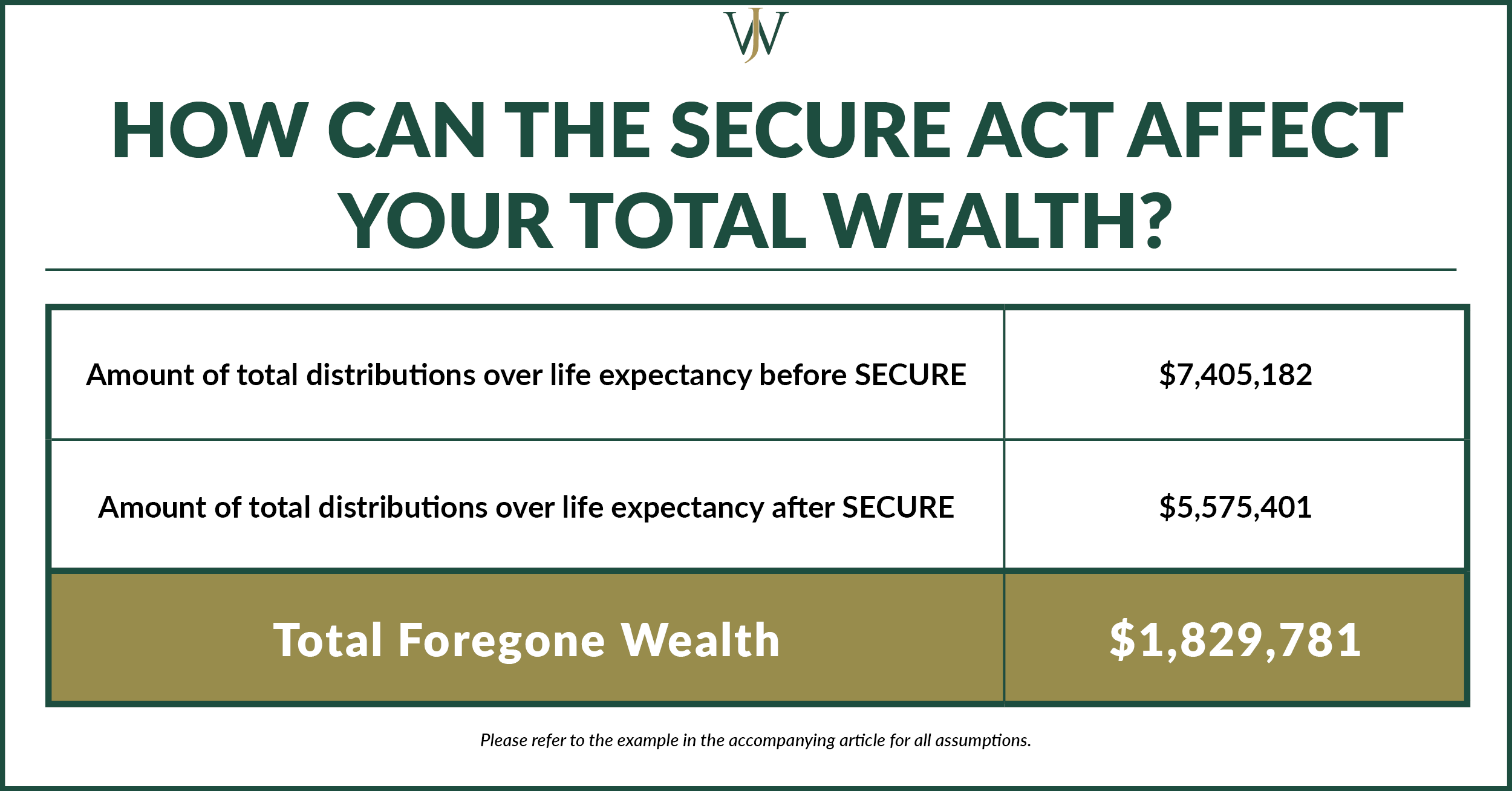 The impact of SECURE for Amy is the difference between wealth accumulation and distributions over 53.3 years versus 43.3 years, along with the heavy tax burden at the required 10 year distribution.

The Non-Monetary Impact of SECURE

What about the non-monetary impact of SECURE? Continuing our example above: when Joe dies, he leaves a $100,000 IRA in a conduit trust for Amy’s 8 year old son. The SECURE Act applies to any beneficiary of an inherited IRA, including trusts.  Joe’s original intention in establishing the conduit trust was to 1) protect the IRA from potential creditors and 2) pay out the IRA over his grandson’s life expectancy, thus providing a steady income stream for life.

Under SECURE, the conduit trust would be required to pay out the balance of the inherited IRA after 10 years, when his grandson is 18 years old.  No one thinks leaving that much money in the hands of an 18 year old is a good idea, and it certainly doesn’t reflect Joe’s intentions in planning for his grandson’s financial future. Moreover, creditor protection of the IRA is eliminated upon distribution from the trust. To add salt to an already bad wound, the kiddie tax is 35%-37% of taxable income in excess of $9,300 (in 2019).

Under SECURE, an individual who does not revise his or her estate plan will lose significant wealth for the next generation and could have undesired non-monetary consequences.

Not all beneficiaries of Traditional IRAs and 401(k)s will be subject to this new 10-year distribution requirement.

Who is exempt from SECURE?

What should you do now that SECURE has passed?

As mentioned previously, individuals with large Traditional IRAs and 401(k)s should consider revising their estate planning.  Because SECURE eliminates the withdrawals based on the beneficiary’s life expectancy, the goal now is to structure estate planning to emulate life expectancy distributions, keeping the following goals in mind:

Some things to keep in mind when planning Roth conversions:

Under SECURE, conduit trusts will be the worst place for an inherited IRA. Conduit trusts are used specifically to protect assets from creditors (including divorced spouses) and to ensure that young or irresponsible beneficiaries have a controlled income stream. If the money is required to be fully distributed to beneficiaries within 10 years of inheritance, the money no longer has protection from creditors. And, what if the beneficiary is too young, a spendthrift, or even a teenager having occasional conflicts with law enforcement? That beneficiary will now have possession over large amounts of funds to which he or she should not have access.

If your estate plan includes the use of conduit trusts upon your death, you will need to rewrite the trust terms to remove the conduit language and replace it with language that permits accumulation of trust assets.  If the trust is already in existence, many states (including Texas) contain a decanting provision in their laws which permits the rewriting of the terms of the trust document. However, mathematical analysis and additional tax planning must be performed here.  Considering the tax brackets for trusts (35%-37% of taxable income in excess of $9,450 in 2020), planning is vital in order to mitigate income tax at these high rates.

Do you have the 3 Essentials of Estate Planning Covered? Find Out Now.

As with all estate and tax planning, considering the impact of all options and potential decisions is vital.  The experts at Willis Johnson & Associates are available to support you in these efforts. With years of experience running mathematical analysis on estate plans, we have the knowledge and experience you need to continuously evaluate your options and make wise planning decisions for the future. Get to know us and what we offer to support corporate executives, including our focus on supporting you through each stage of life.

© 2021 Willis Johnson & Associates. Registration does not imply a certain level of skill or training.