How to Pick Your Retirement Date to Optimize Your Chevron Pension

Your retirement date can evoke a multitude of emotions. Your last day of work may make you feel excited, nervous, nostalgic, or a combination of all three. You may not be thinking about strategically choosing your retirement date.

As a Chevron employee, you should be aware of the impact various savings and investment options have on your retirement planning. Your Chevron Retirement Plan (CRP) Lump Sum pension is one of the many tools at your disposal.

You should be aware and knowledgeable regarding the way your CRP Lump Sum is distributed, so you can make a wise, strategic decision regarding the date you set for your retirement. In some cases, adjusting your date by a few weeks can make a significant financial impact when it comes to the total pension amount to be distributed.

What Data is Your Chevron Retirement Plan Pension Calculation Based on?

Your pension will be calculated based on your last date of employment and benefit start date. The IRS regularly releases spot segment rates that are used to calculate the CRP Lump Sum.

Your CRP Lump Sum — “your pension” — is not solely based on interest rates. However, looking at recent interest rates over time can give you an idea of how your lump sum will be affected in the calculation and better educate your decision on when to retire.

How Does Chevron Calculate the Total Amount of Pension Funds You Should Receive?

While the calculation is fairly complex, the following charts can provide you with an idea of the rates used to calculate your CRP Lump Sum and how they can affect the overall pension funds available to you.

When Chevron employees elect the month they would like to begin their pension, Chevron looks back three months to calculate the rate used for the pension disbursement.

For example, if you are planning to retire and start your pension in April 2022, Chevron would use the blended rate available through January 2022 (three months prior to your month of retirement). This example shows three months of rates and how they are blended to determine your rates for various segments of your pension. 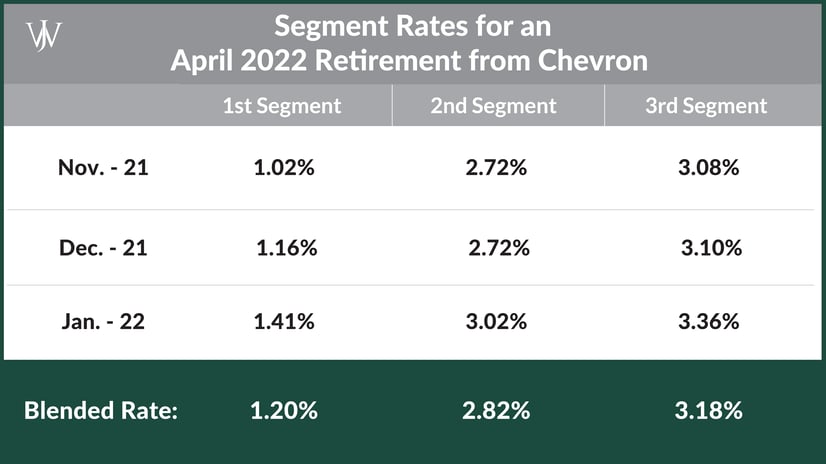 The segments refer to distinct periods of pension distribution:

Together, these rates and terms are used to calculate the lump sum pension value.

Because pension pricing is based on interest calculations, making a slight adjustment in your retirement date may have a significant financial impact on your pension.

As a basic example, consider the following scenario:

Based on this information and the segment rates above, your expected lump sum pension value would be approximately $1.904 million if you started your pension in April of 2022. 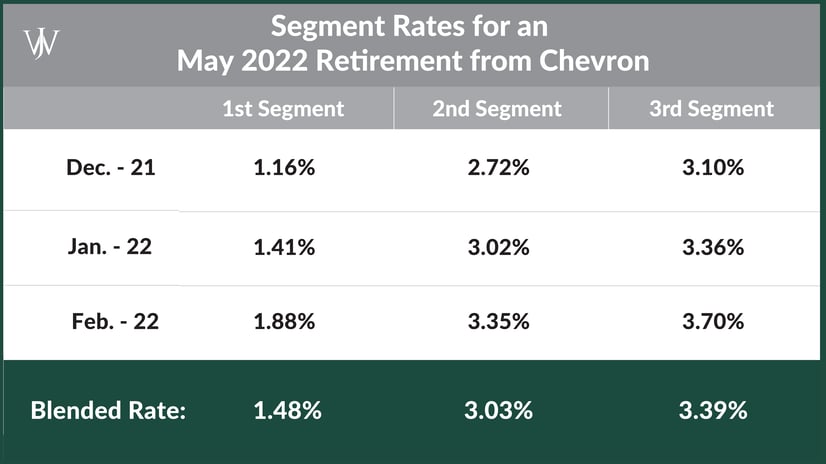 Using the same scenario from above, your expected lump sum pension value for a May retirement would be approximately $1.866 million. If you chose to retire one month earlier, you would have earned an additional $38,389 in your CRP payout. 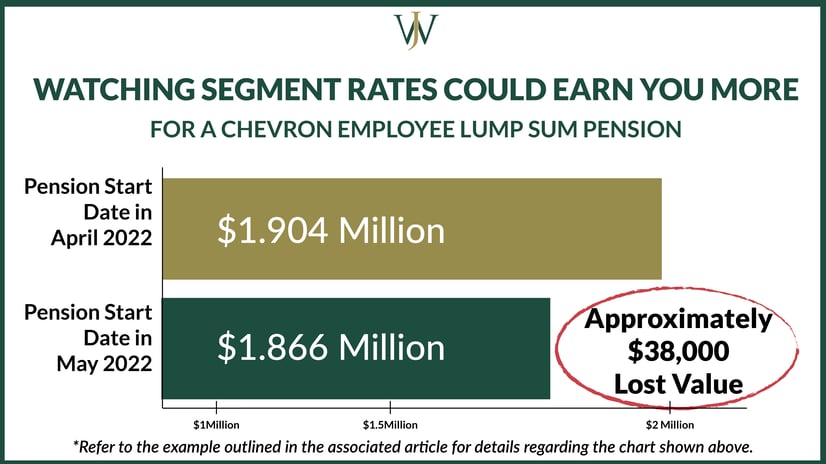 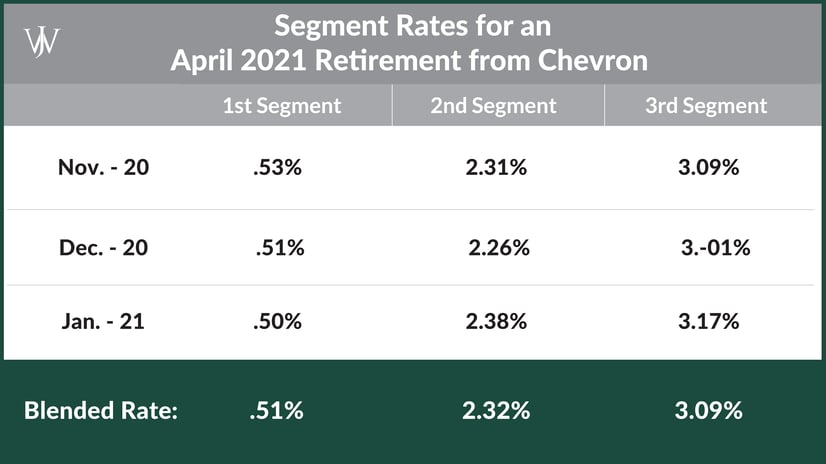 Using the same scenario from above, your expected lump sum pension value in April 2021 would be approximately $1.997 million. If you chose to retire a13 months earlier in April 2021 rather than  May 2022, you would have earned an additional $130,893 in your CRP payout.

Let’s consider one final example that we frequently run with our Chevron clients. What if you retired back in April of 2019? Similarly, Chevron would look back at January of 2019 and December and November of 2018 to calculate the blended segment rates. 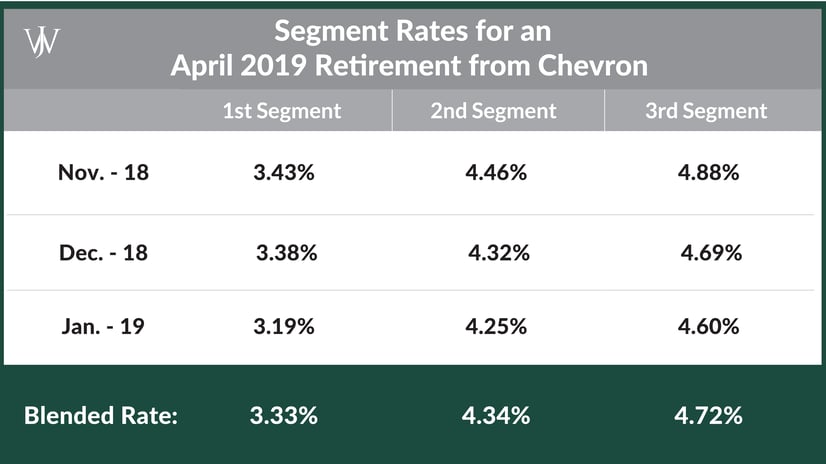 In  April of 2019, the lump sum was closer to $1.643 million, so pushing retirement out and waiting two years to take your lump sum would increase the difference by over $261,000. 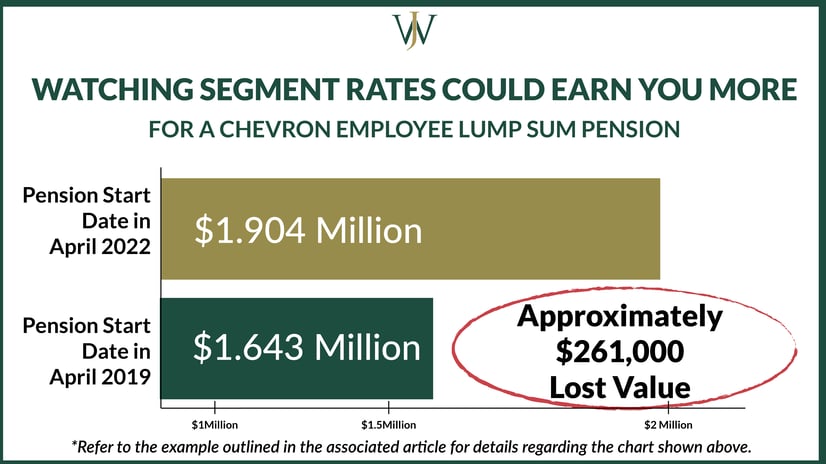 Depending on your pension numbers, the changes in interest rates may have a significant impact on the lump sum value you receive in retirement and could impact your overall retirement planning.

When's the worst time to retire from Chevron? Find out here.

How Can You Plan Strategically to Take Advantage of the Best Pension Calculation Time Frame?

There are various trends you can evaluate to help you plan the best date for your retirement, including reviewing rates published by the Treasury Department.

As of early 2022, the Federal Reserve recently raised interest rates for the first time in three years. Even more so, the Fed has plans to raise rates consistently this year and going forward as a way to put a damper on inflation. There is an idea that the FOMC will rate rates in the remaining 6 meetings of the year.

The 10-year Treasury yield is highly correlated to the segment rates used to calculate your pension amount. Current 10-year rates are around 2.50%. The last time 10 year yields were that high was in April of 2019, like in our historical example above. An April 2019 pension equated to a $1.643 million pension payout whereas the current April 2022 pension in our example equals $1.904 million. Based on the historical data, we believe the segment rates will continue to trend up. 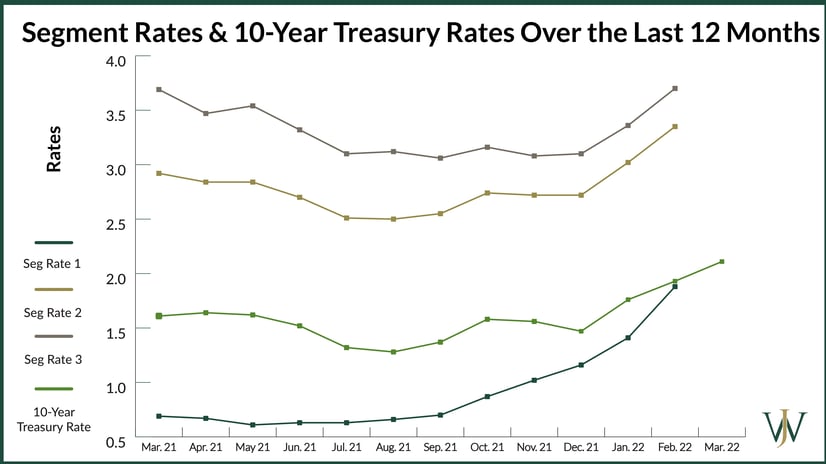 Segment rates correlate with US Treasury rates; when Treasury rates are on the rise, segment rates will increase accordingly. And, as mentioned, rising interest rates mean a lower pension calculation. By looking back over a 12-month period and reviewing their predictions, you may be able to get an idea of which direction rates will head in in the future. As an example, if during the past several months, rates have trended upward, that has a negative impact on pension calculations. Time your retirement date to take advantage of the best rate/pension scenario. The look-back window gives you an opportunity to set a time period that’s most financially appealing to you.

For example, if you intend to retire later this summer, you will be able to review rates from April 2022 or May 2022 to determine if it is financially advantageous to retire in July or August 2022. The IRS has recently published the February segment rates, which saw the short, intermediate, and long-term rates increase sharply from the previous month.

While in this example, we've determined that a March retirement would equate to a larger lump sum pension than retiring in May, as rates continue to rise, it may be more advantageous to accelerate your retirement into early 2022 rather than waiting until next year for an even larger lump sum.

What's the outlook on segment rates and how should you choose your retirement date?

Before the rise in rates in March 2020, segment rates had been coming down since November 2018. Upon the release of March  2021 rates, we saw the intermediate and long-term rates jump significantly. Rates continued to rise pretty consistently during the first few months of 2021 before starting to trend back down in recent months. After substantial concerns about rampant inflation in the fall of 2021, interest rates began to rise to tamper inflation back to sustainable levels.

Segment rates are based on broad market interest rates, which declined sharply from late 2018 to mid-2021— whether you’re looking at short-term rates (segment 1) or long-term rates (segment 3) — but after the record lows we saw in July of 2021, they've started to slowly creep upwards again. The Federal Reserve Chairman Jerome Powell announced in March of 2022 that the Fed would be raising interest rates and bumping the federal funds rate to a target range of 0.25 to 0.50 percent. With the war in Ukraine, inflation, and other factors in play, the 10-year treasury rates reached a 2-year high of 2.475% on March 25, 2022.

With that, it may be more attractive to accelerate your retirement into the early months of 2022 instead of waiting until summer or fall.

The primary reason for this increase is the economic outlook. As concerns surrounding inflation remain top of mind, the Fed faces pressure to raise interest rates to alleviate pressures on the everyday consumer. Remember, segment rates and lump sum pension amounts have an inverse relationship.

Segment rates are on the rise from decade lows, and trends and leading indicators point to continued increases in the coming months. It’s crucial to be keeping an eye on these rates to determine which retirement date can maximize your lump sum pension amounts.

For many executives at Chevron, taking their lump sum pension in October could mean a substantially higher payout than if they decide to retire earlier in the year, but it's a gamble.

As you prepare for retirement, your pension is designed to provide a valuable means of ongoing support. It’s important to ensure you’re maximizing the value it provides. Our financial advisors can offer advice and feedback on your pension planning dates, as well as on additional avenues for making the most of your pension, such as tax-planning strategies. Review our process and the ways we can support you in preparing and positioning yourself for retirement. 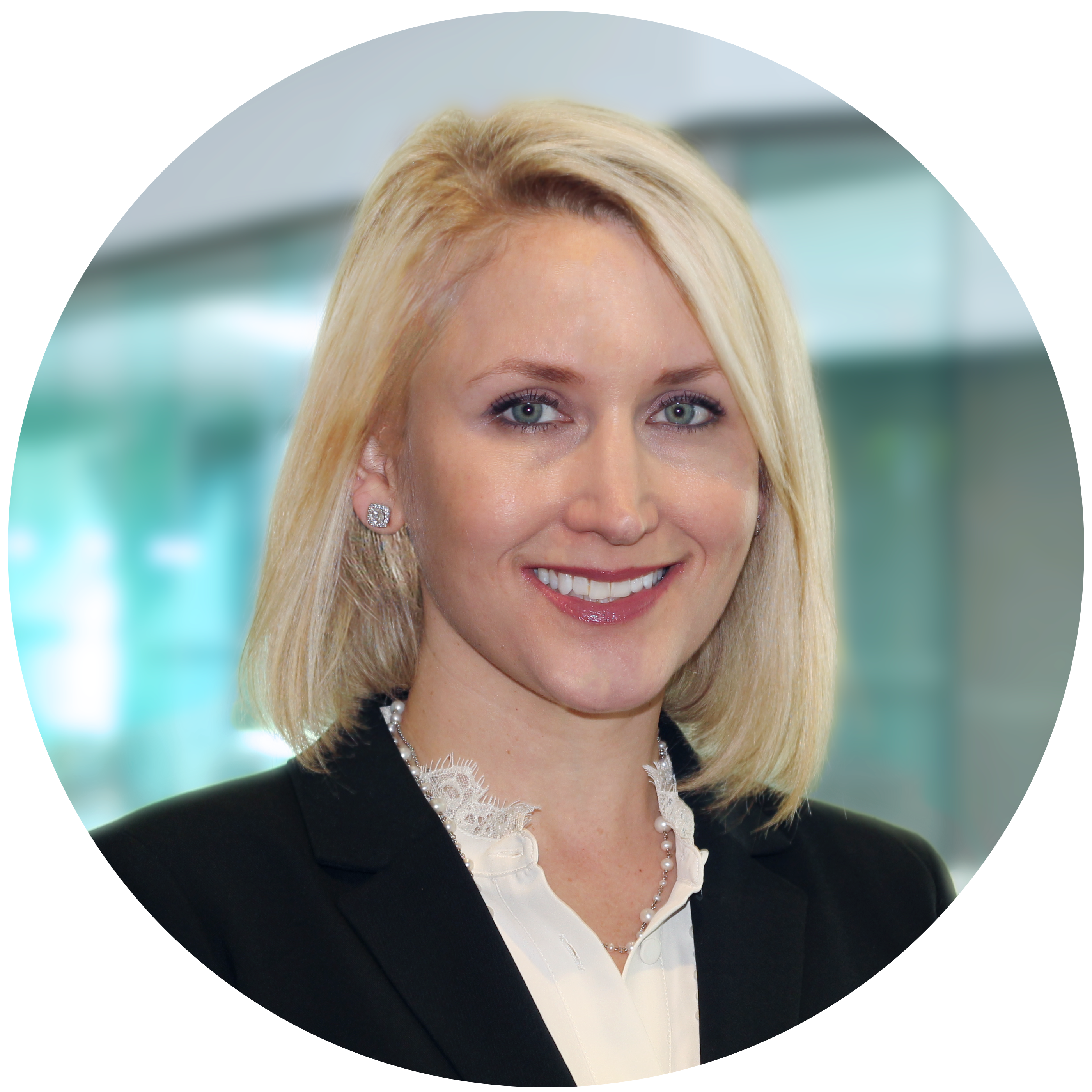