I was recently working with a Shell executive client, let’s call her Lynn, who had been putting in long hours on a challenging assignment and was ready to retire by September 30, 2022. I worked with her to optimize a number of items in her financial plan, but the election that made the biggest difference to her—a difference of more than $50,000 in tax savings—was persuading Lynn to retire on October 15th, only 15 days later than her original September 30th retirement date.
Lynn came to see me for a second opinion. She wanted to be sure that her finances were properly set up for success and that she had everything in place to be financially independent in retirement. She told me how she planned to enjoy the Thanksgiving holiday with her family at her mother’s house on the East Coast, and take her husband and grown children to Prague for Christmas.

She had been with Shell for the entirety of her career, working her way up to an executive role, but had not been able to spend as much time with her family as she would have liked, for a number of years.

Our goal in assisting Lynn was twofold:

After many years at Shell, Lynn had a number of retirement benefit plans at her disposal. Not only was Lynn an exceptional saver throughout her career where she contributed to her Shell Provident Fund and qualified for her pension, but in doing so, Shell set aside additional funds for her retirement through the Shell 80 Point Pension BRP and Shell Provident Fund BRP non-qualified plans, which put her in great financial shape for retirement.

For many of its high-income employees, Shell offers two non-qualified retirement plans to circumvent various rules the IRS has implemented regarding income and defined benefit plans. One of these we often discuss with clients is the IRS Section 415 income limitations. Per these income limitations, after an employee makes $305,000 of eligible income in 2022, Shell is prohibited from contributing to the qualified defined contribution plan the employee qualifies for, the Shell Provident Fund.

By offering these non-qualified benefit plans, Shell is able to set aside the excess contributions for high-income earning employees into a non-qualified, or excess benefit, plan for both the 401(k) and for the pension. These funds can be invested and grow until the employee’s retirement or departure from the company. 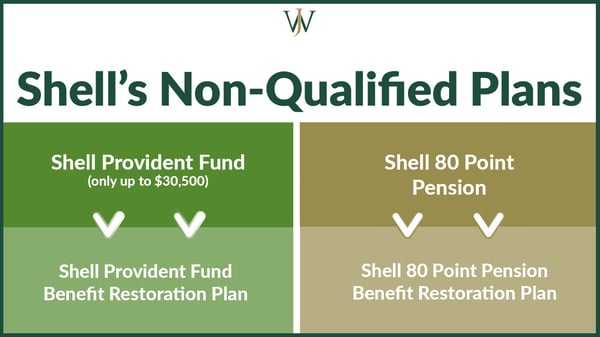 Shell’s Provident Fund Benefit Restoration Plan (or BRP, for short) acts as an additional bucket for Shell to deposit any of the contributions they would’ve made on your behalf to. Let’s consider an example:

Shell’s 10% contribution amount of $50,000 to your retirement plans would be split as such:

In the same way as the Provident Fund BRP, Shell also offers a Pension BRP. After reaching the IRS income limits, Shell is also prohibited from contributing to your pension so they have a non-qualified excess benefit plan called the Shell 80 Point Pension BRP where they place those excess contributions on your behalf.

At Shell, both of these benefit restoration plans payout 90 days after retirement. There is an exception if you are designated a key executive at Shell. If that is the case, the BRPs are distributed six months after termination.

In the year the BRPs are distributed, they are taxed at earned income tax rates. Thus, the higher your taxable annual income when your BRPs are paid out, the higher the marginal tax bracket you will fall into for that year, and the higher percentage of taxes you will pay on the Benefit Restoration Plan funds you receive as well as on whatever other income you may have for the year.

Let’s go back to Lynn’s scenario. If Lynn retired on September 30th, her annual income would be $600,000 (base salary + bonus + Shell Performance Shares that vested earlier in 2022).

Between her Shell Provident Fund BRP and her Shell 80 Point Pension BRP, Lynn had an excess of $1,000,000 in Benefit Restoration Plan funds (BRPs). While this is a great form of additional savings, having these funds payout in 2022 would incur a huge amount of taxes at the highest marginal tax rate.

If Lynn decided to retire on September 30, 2022, her Shell BRP funds would be subject to the 37% ordinary income tax rate when distributed in 2022, as her total taxable annual income would exceed the $647,850 limit for married couples filing a joint tax return. Lynn’s Shell Provident Fund and Shell Pension BRP would be paid out in the 2022 year, given that Lynn’s retirement date is more than 90 days before the year’s end.
Remember, at Shell, the BRPs payout 90 days after retirement.*

However, Lynn’s decision to wait until October 15th to retire enabled her to push her Shell Provident Fund BRP and Pension BRP distributions from 2022 to the 2023 tax year. 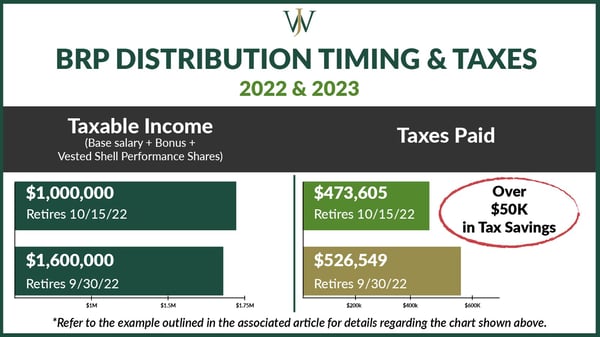 Postponing her retirement only 15 days allowed Lynn to utilize lower marginal rates for the first $647,850 of her Provident Fund BRP & Pension BRP distributions and save a substantial amount in taxes as a result.

Despite paying the additional Social Security tax on her BRP distribution, pushing the Provident Fund BRP and Pension BRP payout out to the following tax year would result in substantial tax savings for Lynn—totaling an excess of $50,000.

By choosing to retire just 15 days after her original preferred date, on October 15th rather than September 30th, Lynn’s Shell BRP payout distributions pushed into early 2023 and the funds will be taxed at a lower marginal rate.

By choosing to retire just 15 days later, Lynn’s taxes were reduced by approximately $52,944, and she can still enjoy the holiday vacations she planned for her family.

While it’s important to understand your company’s compensation plans and benefits, it’s also important to understand how your retirement savings options can be utilized in the most tax-efficient way. As we have demonstrated using Lynn’s situation, something as simple as the date you retire can open the door to tax-advantaged saving opportunities.

If you’re uneasy and think you may be missing something in your current plan, consult with your financial advisor, or contact a member of the Willis Johnson & Associates team to learn more about how to create a financial road-map that maximizes your retirement savings by strategically aligning your company benefits with your long-term financial plan.

© 2023 Willis Johnson & Associates. Registration does not imply a certain level of skill or training.