401(K) Income Limits: The Mistake Professionals Earning Over $330,000 Make All the Time

Many executives believe that they're maxing out their 401(k) contributions year after year.  However, due to the IRS' 2022 401(a)(17) limitation of $330,000 in income and the impact it has on both individual and company contributions to a 401(k), many of these corporate professionals unknowingly miss out on thousands of dollars in potential contributions.

There is a fairly unknown rule known as the 401(a)(17) contribution limit that keeps many corporate professionals from fully maxing out pre-tax contributions to their 401(k). The 401(a)(17) rules set a maximum on how much of an employee's compensation can be used to determine an employer's contribution or match amount to the employee's 401(k) and many other types of retirement plans.

Specifically, the 401(a)(17) rules only allow super-savers in 2023 to receive 401(k) contributions from their employers with consideration up to the first $330,000 of income for a qualified retirement plan, like a 401(k). Once someone begins making over $330,000 a year, an employer can no longer contribute on the employee's behalf to their company’s 401(k) plan.

An important thing to note is that once this income threshold is reached, only the company is prohibited from continued contributions. An employee is limited in their deferrals and 401(k) contributions by the IRS' annual contribution limits.

Learn more about how these contribution limits impact your 401(k) at:

In some instances, an employer's plan can specify that contributions to a qualified retirement plan (ex.401(k)) are halted once a participant's total compensation exceeds the annual limits. If your company specifies this, once you reach the $330,000 compensation threshold, both you and your employer will be prohibited from additional contributions to a 401(k).

Exceptions to the 401(a) limits

There are exceptions to the 401(a)(17) earnings limit rules whereby a company can allow their employees to consider income past $330,000 when making contributions to retirement plans. Few organizations actually permit these exceptions as it regularly messes up anti-discrimination testing, which causes bigger problems for the organization.

How Could The 401(k) Income Limits Affect You?

We started working with a new client that almost completely missed out on maxing out his 401(k) contributions for the year, despite thinking he was set up to max it — all due to the 401(a)(17) limitations.

This particular client was a high-income executive from one of Houston's leading oil companies aiming to max out his contribution to his company's 401(k). He had a long career with the company and was grossing over $600,000 annually between base pay and bonus.

It's important to note that the 401(a)(17) limits take total income into account, including any bonuses or commissions received in addition to a salary.

Originally, he took his maximum employee contribution amount and divided it by his expected benefit-eligible compensation (salary + expected bonus) to determine how much to contribute pre-tax from his paycheck.

His assumption was that if he set his pre-tax contribution to his 401(k) to 5%, then he would max out by year-end; however, this would prove to be a crucial error. Why? Because after his bonus and salary reached the $330,000 limit, both he and his employer were prohibited from making additional contributions to his 401(k).

Since this saver set his contribution to 5%, he would have only contributed $16,500 (= $330,000 * 5%) into his plan— potentially missing out on $13,500 of pre-tax contributions he could have made into the plan! After we sat down with him and showed him his 401(k) statement, he realized that due to the same error in prior years, he had missed out on thousands of dollars in tax-beneficial savings. 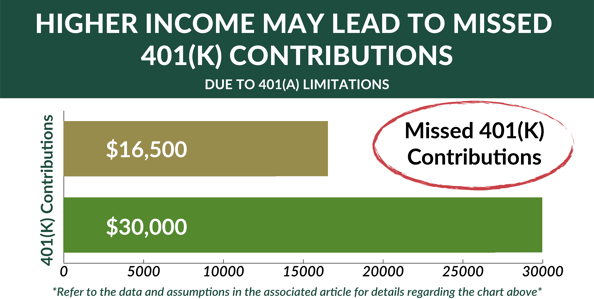 The 401(a)(17) limits apply not only to employee contributions but also to employer contributions. Once you earn over the benefit-eligible contribution limit ($330,000 for the 2023 year), your employer is no longer able to put money into your 401(k). Many employers will set up non-qualified retirement plans so they can continue making contributions even if they cannot direct them to the 401(k), such as:

These non-qualified retirement plans have additional limitations and restrictions making them a nice benefit, but less attractive than traditional 401(k)’s. If you have a non-qualified plan, there are many considerations you should assess leading up to and before electing a retirement date to maximize your benefits and minimize taxes.

Both the maximum contribution and earnings limits are inflation-adjusted annually. Both limits utilize the same cost of living adjustment, so in most cases, the percentage deferral stays the same from year to year.

Generally speaking, if you are a high income earner and are subject to the 401(k) earned income limits, you will not be able to contribute to your 401(k) proportionally throughout the entire year.

Oftentimes, we see high earners make contributions to their 401(k) over the first half to three quarters of the year. Once they have hit the earnings limit, their net paycheck goes up as they can no longer make contributions to their company 401(k). It’s important to realize that if you are a high earner, you will have lumpy take-home pay, with lower earnings at the start of the year than at the end.

As part of our comprehensive asset management and planning process, we sit down with clients annually to review projected compensation and employee benefit plans, educating you on your options and assisting you in making the changes necessary to optimize your specific situation. At Willis Johnson & Associates, we work with our clients to ensure they get their company's full 401(k) contribution, max out their pre-tax and after-tax contributions, take advantage of backdoor Roth IRAs to ensure they are on track for success, and facilitate after-tax roll-outs from the 401(k) to get the maximum amount of savings. If you have any questions about the 2022 contribution and compensation limits, please contact your advisor, or schedule a free consultation with one of our experts.

© 2023 Willis Johnson & Associates. Registration does not imply a certain level of skill or training.