When viewing your Fidelity NetBenefits online, you may see some additional accounts outside your BP 401(k) and your RAP pension:

These are non-qualified plans related to your BP retirement accounts, requiring some significant planning.

How Do BP's Non-Qualified Plans Work?

The ECP and EBP are "non-qualified" plans. Unlike the "qualified" 401(k) and "qualified" pension, these non-qualified accounts do not have the same protections in many ways. For example, they are subject to the creditor liabilities and financial health of BP, and they do not have the same personal creditor protections for the account owners. Also, the election options for these plans are much less flexible than the elections available in the 401(k) and pension plans.

The ECP (for both the ESP and the RAP) is funded when your compensation – base and bonus (not any stock compensation) exceeds an IRS-specified dollar amount. Almost every year, these dollar amounts increase. In 2022, the dollar limit at which the ECP's funding begins is $305,000.

Let's illustrate using an example. In 2022, Susana has a base salary of $320,000 and a target bonus of 25%. So, assuming no performance adjustment in her bonus, her compensation is $400,000 for 2022. When Susana receives her September paycheck, she will cross the $305,000 compensation threshold. As a result, BP will begin contributing its 7% matching contribution initially meant for the ESP to the ECP. Additionally, BP will contribute the company's crediting amount (a percentage based on Susana's age and years of service) to the Pension ECP instead of her pension's cash balance account. 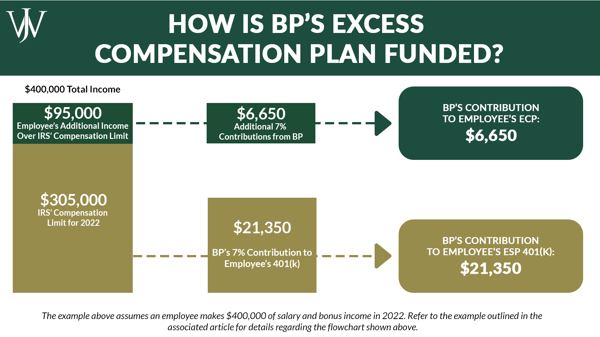 The EBP, related only to the ESP 401(k), is funded when your contributions to the 401(k) over-fund the account and push BP's matching contribution out of the 401(k). How does that happen?

Let's continue with our example from earlier. In 2022, Susana (age 48) elects to frontload her ESP 401(k). Her goal is to have her bonus primarily fund her 401(k) and to have 401(k) funding completed earlier in the year so she can benefit from compounded growth. In the first quarter, Susana contributes the following towards her ESP 401(k):

As a super-saver, $55,500 seems deserving of a pat on the back for retirement contributions; however, Susana made a common mistake we see from high-earners at BP. By overcontributing to the pre-tax and after-tax sources within her 401(k), she has pushed out BP's ability to contribute a full 7% of her salary to her ESP! Instead of the $21,350 BP can contribute on her behalf, she maxed out the 401(k) with only $9,000 in contributions from BP. 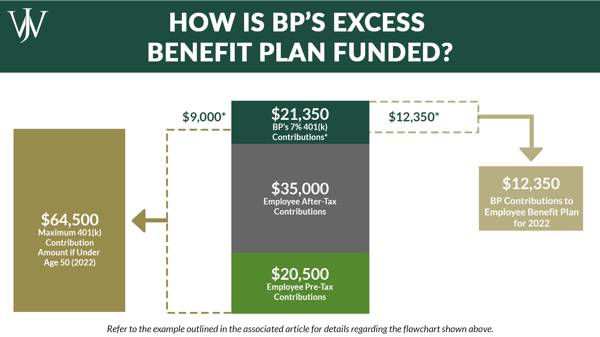 Financial Planning Considerations for BP Professionals with the ECP or EBP

Monitor Contributions to the BP ESP

It should be noted from the above examples that the ECP pour-over is compulsory for those with compensation exceeding the limits. Therefore, there is no way to avoid the pour-over of BP's match if your compensation is too high.

However, you can mitigate the pour-over to the EBP with prudently crafted contribution strategies and monitored contributions throughout the year. Using a carefully calculated formula, you can make contribution elections for the pre-tax, Roth, and after-tax sources in the 401(k).

Review our guide to maximizing your BP savings here >>

As you contribute more to the after-tax source, you increase the possibility that your contributions will push BP's match into the EBP. Therefore, you should monitor your total contributions for the year. When the employee and employer contributions hit the max limit - $64,500 or $71,000 for those 50 and over – the employer's ESP contribution pours over to the EBP.

Manage Investments in the ECP & EBP

The ECP and EBP have the same investments available in the ESP. The default investment is a target-date fund tied to your age and prospective retirement date. The Pension ECP does not have any investment choices as it is credited with interest based on your hire date with BP.

For example, you may wish to choose more of the stock funds in the available investment choices – the S&P Index.

When you get closer to leaving BP, you will want to invest more conservatively in the 401(k) ECP and EBP accounts. Consider if the stock market should drop significantly before collecting your ECP and EBP benefits. Unless you choose any other election (as detailed below), these accounts will pay out 14 months after leaving the company.

The default distribution for the non-qualified plans – the ECP and EBP related to the 401(k) - is 14 months after you leave BP. 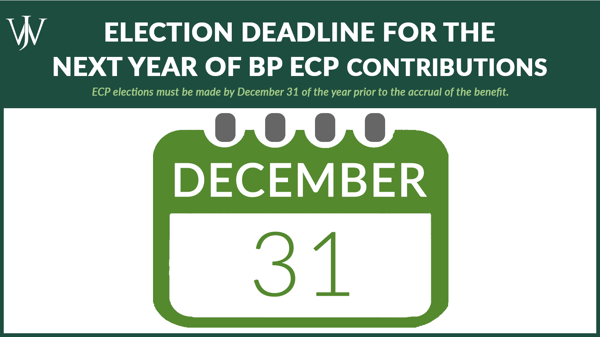 If you choose to change the default or previously elected timing of the distributions from your ECP, EBP or Pension ECP, you can under the following parameters: 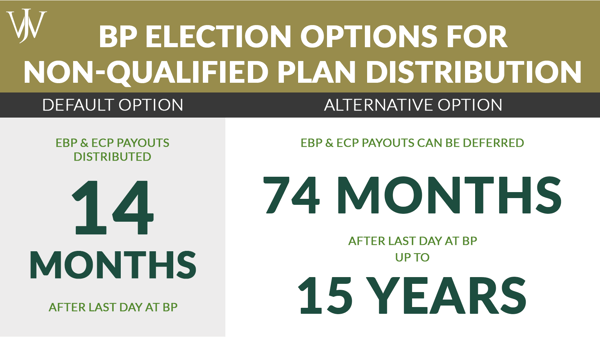 It depends on a variety of situations and matters pertinent to you. The key considerations are cash flow and taxes.

Let's consider an example of prioritizing a BP retiree's cash flow. Chris is retiring from BP at age 54. Chris is mostly sure that he has enough non-retirement funds to last until age 59 1/2, when he can take penalty-free distributions from his retirement accounts. Still, he would like a bit more of a buffer. To ensure he has enough funds available at retirement, his most beneficial election is to distribute his non-qualified accounts 14 months past his retirement date.

Let's tweak our example slightly for a BP retiree prioritizing the tax impact instead. Suppose Chris leaves BP to take another highly compensated position at another company. Chris is concerned that his non-qualified plans will drive him well into the top tax brackets when added to his salary and bonus at the new company. Therefore, Chris opts to push out his distributions for 74 months so he will receive these payouts after his expected retirement when his income is lower.

Pay Attention & Have a Financial Strategy

The difficulty with non-qualified plans is twofold: to maximize the benefit, you have to know the plans well enough to develop a strategy and be disciplined enough to execute that strategy. To make the most of both the ECP and EBP, you must:

Partner with a Financial Advisor to Manage Your ECP & EBP Effectively

Managing your ECP and EBP properly requires continued maintenance and monitoring. Willis Johnson & Associates works with BP professionals to help them plan their future, develop contribution and allocation plans, monitor progress throughout the year, and implement the best distribution strategy to capitalize on the impact of these accounts. These non-qualified plans are complex. We help make them simple. Learn more about our process and client experience here. 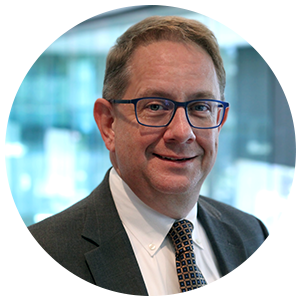